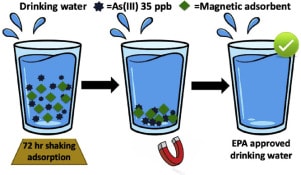 Arsenic related mortalities in the US represent a cost of over 500 million dollars per year. The colonias in the US- Mexico border region are communities that are off the water treatment grid, people in this area build their own un-regulated wells to obtain water. Because of this, they have to deal with arsenic levels 8 times higher than the federal limit in their drinking water. Investing in the development of a point-of-use water technology that is easy to deploy and that can ensure arsenic levels below the EPA maximum contaminant level (10 µg/L) is of high importance. At NEWT, we have designed magnetic composite nanoadsorbents (nanoparticles that can trap contaminants) with high affinity towards arsenic species that have proved to remove arsenic below EPA limits (2.78 ppb) from drinking water.

In this work, a series of novel zeolitic imidazolate framework (ZIF), which are 3D compounds composed of metal and organic species, decorated superparamagnetic graphene oxide hybrid nanoadsorbents were synthesized, characterized, and tested for their As(III) adsorbed amount in simulated drinking water. Three isostructural and water stable ZIFs, (ZIF-8, ZIF-67 and ZIF-Zn/Co) were studied. The three composite nanomaterials and their parent materials were characterized for their size and morphology through transmission electron microscopy (TEM), for their crystallinity by powder X-ray diffraction spectroscopy (pXRD), and their surface was characterized through infrared spectroscopy (FTIR) and Braunner Emmet-Teller (BET) methods. The nanomaterials were tested as adsorbents in a representative drinking water matrix containing arsenite (As(III)) at an initial trace concentration (realistic in some natural drinking water sources) of 35 µg/L. The nanoadsorbents were magnetically captured and removed after adsorption in batch conditions (Figure 1). Out of the three composites, C-2 (based on ZIF-67) shows the highest As(III) adsorbed amount at an initial concentration of 35 µg/L (q0) of 202 µg/g, followed by C-3 (based on ZIF-Zn/Co) with 102 µg/g and C-1 (based on ZIF-8) with 82 µg/g. This work simulates realistic conditions in terms of both, the water matrix and the As(III) initial concentration. Studies where unrealistically parameters (e.g., high arsenic concentrations, DI water matrix, high sorbent:sorbate ratio, among others) are misleading, and we made a point on avoiding them.

In conclusion, this is one of the few studies that shows magnetically-recoverable composite nanoadsorbents that selectively remove As(III) from low initial concentrations (35 µg/L) in a simulated drinking water matrix yielding water that meets EPA standards. These newly developed magnetic hybrid adsorbent nanomaterials are suitable water and wastewater treatment applications. Future plans for this work include testing the arsenic removal capacity of the nanomaterials from real groundwater samples as well as testing the recoverability of the nanomaterials in a magnetic reactor.