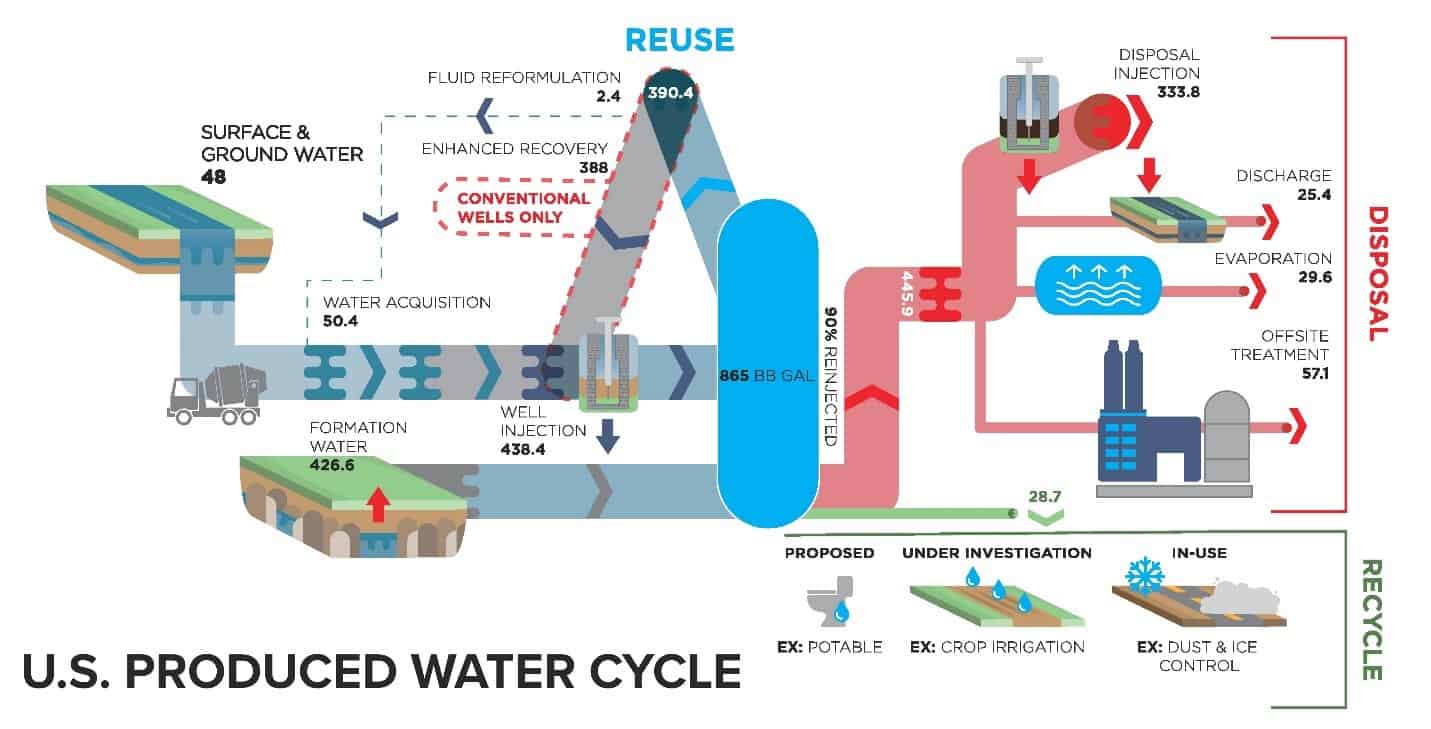 Hydraulic fracturing (or fracking) is the cornerstone of domestic oil and gas production – spurring on the so-called “shale gas revolution” in the United States around the early 2000’s. Fracking has enabled access to the vast quantities of hydrocarbons contained in low porosity shale reservoirs scattered across the country. Specifically, fracking requires that large volumes of a water-based fracking fluid (up to millions of gallons per well) be pumped underground at pressures sufficient enough to crack (or fracture) the low-porosity shale. These fluids contain a proppant, typically sand, which then embeds in these newly formed fissures to effectively increase the porosity of the shale deposit and facilitate the flow of entrapped hydrocarbons back to the surface. Along with the desired oil and gas products, however, are millions of gallons of highly contaminated water known as produced water.

In fact, it’s estimated that over 800 billion gallons of this produced water is generated every year in the United States. From a treatment perspective, produced waters may be one of the most challenging industrial wastewaters to address. Aside from being a highly complex mixture of simple salts, scale forming ions, trace hydrocarbons and various bacterial species, these industrial wastewaters are generated at remote well sites far from any centralized treatment infrastructure. As a result, the vast majority of produced water is simply disposed of by pumping it back underground into designated disposal wells. However, emerging modular nanotechnology-enabled treatment methods have the potential to shift industry practice towards on-site treatment and reuse – with the ultimate goal of closing the water cycle for hydraulic fracturing operations (Figure).

A recent NEWT industry collaboration takes a closer look at the shortcomings of current produced water management practices and highlights the opportunities for new technologies to prove their worth. The article involves students and professors from two university partners and industry collaborators:  Christian L. Conrad (Rice), Y. Ben Yin (Rice), Ty Hanna (Apache Corporation), Ariel J. Atkinson (ASU), Pedro J.J. Alvarez (Rice), Thomas N. Tekavec (Shell), Michael A. Reynolds (Shell), and Prof. Michael S. Wong (Rice). Drawing on industrial practice and technoeconomic constraints, this work identifies key contamination metrics useful in tracking water quality improvements in the context of fracking operations and suggest “fit-for-purpose treatment” to enhance cost-effective regulatory compliance, water recovery/reuse, and resource valorization. Technologically, this paper highlights numerous Advanced Oxidation Processes (AOPs) as promising alternatives to address bacterial and organic contamination in these complex waters – particularly electrochemical systems which can be easily modularized and transported to drilling sites. Regarding inorganic contaminants, the team suggests that greater focus should be placed on technologies which can selectively reduce the concentration of multivalent, scale-forming ions rather than complete desalination. For many on-site reuse targets, high concentrations of simple salts (e.g., NaCl) are often not problematic, but ions with the potential to form precipitates can be of great concern. Finally, higher value opportunities for targeted end-uses of treated produced waters are evaluated, such as crop irrigation, and the remaining uncertainties pertaining to these practices are identified.

As an associated project of NEWT’s Thrust 1, this effort has helped identify further areas of improvement in the context of materials development including (electro)catalysts, membranes, and more. Some examples of this effort can be seen in other recent NEWT publications here and here.

Note: This work was recently recognized by the Greater Houston Section (GHS) of the American Chemical Society (ACS) with the ACS GHS P3 Salute to Excellence Award (Partners for Progress and Prosperity).